The country also stuck to its plan by welcoming 58 per cent of its newcomers under the economic class, while 27 per cent arrived through family sponsorship, and the remaining 15 per cent were welcomed under the refugee class.

25 per cent of new immigrants came from India

India remains the main source country of newcomers to Canada. The approximately 86,000 Indians who became permanent residents in 2019 accounted for 25 per cent of all newcomers to Canada. China was a distant second accounting for 9 per cent of newcomers, followed by the Philippines which accounted for 8 per cent of new immigrants. Nigeria, the United States of America, Pakistan, Syria, Eritrea, South Korea and Iran rounded out the top 10 source countries. 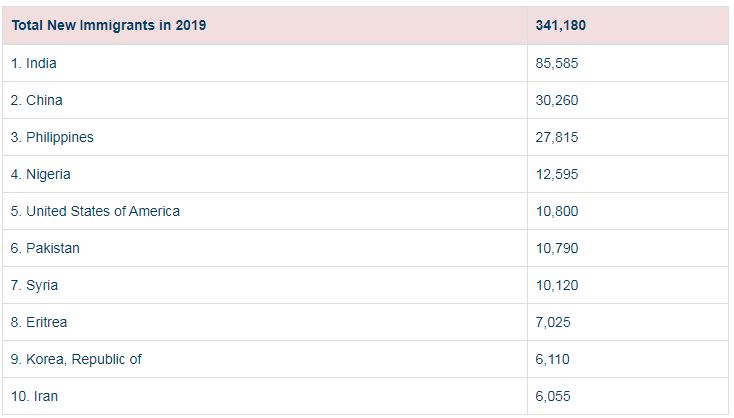 45 per cent of newcomers settled in Ontario

Ontario continues to be by far the top destination for newcomers, welcoming 45 per cent of the national share in 2019. Its share increased by two percentage points from 2018. This may be explained by the Quebec government’s decision to reduce its immigrant intake by 20 per cent in 2019. As a result, Quebec fell two spots in 2019 to the fourth leading destination of newcomers to Canada. British Columbia moved into second place as it welcomed 50,000 immigrants, with Alberta in third place.

Manitoba enjoyed a very strong immigrant intake as it welcomed nearly 19,000 immigrants last year, a 24 per cent increase compared with its 2018 intake. Saskatchewan’s immigration levels were nearly identical as in 2018, with the province welcoming nearly 16,000 newcomers.

Immigration to Atlantic Canada continued to increase, with Nova Scotia and New Brunswick experiencing the largest gains. Nova Scotia saw its intake rise by 27 per cent to over 7,500 immigrants while New Brunswick enjoyed a 30 per cent gain as it welcomed 6,000 newcomers.

Yukon also experienced a healthy gain as its intake grew by 24 per cent to 400 immigrants. 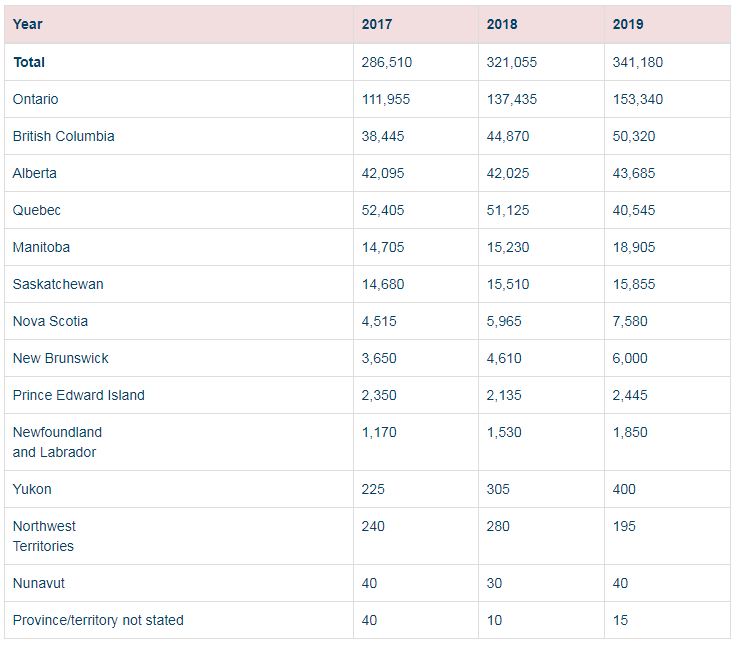 35 per cent went to the Greater Toronto Area

Canada’s four largest cities (Toronto, Montreal, Vancouver, and Calgary) together welcomed 62 per cent of all newcomers to the country, down slightly from their 64 per cent share in 2018. The decline is due to Quebec’s decision to reduce its immigration levels as Montreal’s intake fell by nearly 10,000 newcomers last year.

According to its 2019-2021 Immigration Levels Plan, the federal government is targeting an additional 341,000 newcomer arrivals in 2020. Since this target was met last year, Canada may exceed it again this year. In fact, the plan gives Canada the flexibility to welcome up to 360,000 newcomers in 2020. We will have more clarity when Immigration Minister Marco Mendicino tables the federal government’s 2020-2022 Immigration Levels Plan in the near future—potentially within the coming month.

The cost of living in Portugal