For most of the period since 2000, Turkey has maintained a longterm focus on implementing ambitious reforms in many areas, and government programs have targeted vulnerable groups and disadvantaged regions. Poverty incidence more than halved over 2002–15, and extreme poverty fell even faster.

During this time, Turkey urbanized dramatically, maintained strong macroeconomic and fiscal policy frameworks, opened to foreign trade and finance, harmonized many laws and regulations with European Union (EU) standards, and greatly expanded access to public services. It also recovered well from the global crisis of 2008/09.

Turkey’s response to the influx of approximately 3.6 million Syrian refugees has been exemplary and provides a model to other countries hosting refugees. However, there has been a slowdown in reforms in several areas in recent years that, together with economic vulnerabilities, risks reversing some of the progress made to date.

Turkey’s largely free-market economy is driven by its industry and, increasingly, service sectors, although its traditional agriculture sector still accounts for about 25% of employment. The automotive, petrochemical, and electronics industries have risen in importance and surpassed the traditional textiles and clothing sectors within Turkey’s export mix.

Turkey remains highly dependent on imported oil and gas but is pursuing energy relationships with a broader set of international partners and taking steps to increase use of domestic energy sources including renewables, nuclear, and coal. The joint Turkish-Azerbaijani Trans-Anatolian Natural Gas Pipeline is moving forward to increase transport of Caspian gas to Turkey and Europe, and when completed will help diversify Turkey’s sources of imported gas.

After Turkey experienced a severe financial crisis in 2001, Ankara adopted financial and fiscal reforms as part of an IMF program. The reforms strengthened the country’s economic fundamentals and ushered in an era of strong growth, averaging more than 6% annually until 2008. An aggressive privatization program also reduced state involvement in basic industry, banking, transport, power generation, and communication. Global economic conditions and tighter fiscal policy caused GDP to contract in 2009, but Turkey’s well-regulated financial markets and banking system helped the country weather the global financial crisis, and GDP growth rebounded to around 9% in 2010 and 2011, as exports and investment recovered following the crisis. 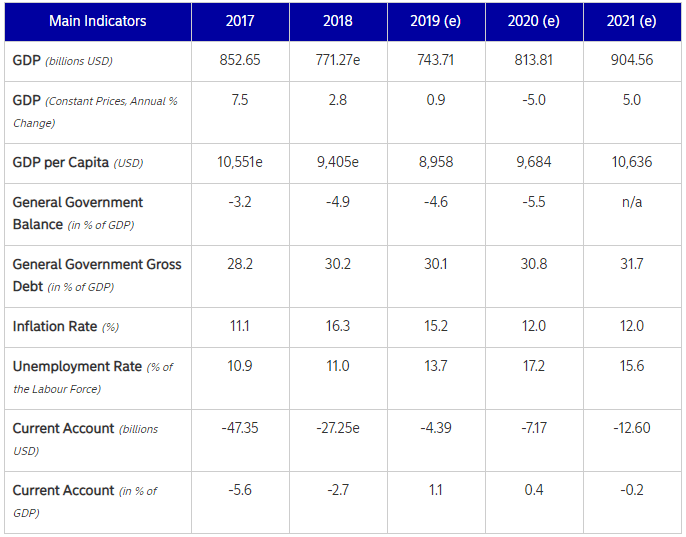 The agricultural sector constitutes 6.08% of Turkey’s GDP. Despite employing nearly 19.1% of the population (down from 19.2% a year earlier), the sector continues to suffer from low productivity due to reliance on small farms. Approximately 11% of Turkey’s territory is used as agricultural land. Wheat is the country’s main crop, though Turkey is the world’s third largest exporter of tobacco and the largest producer of hazelnuts (nearly 70% of global production). Turkey continues to be a net exporter of agricultural products (nearly USD 16.2 billion in agricultural and food exports as opposed to USD 11.5 billion in imports in January-November 2019 according to Turkish Federation of Food and Drink Industry Associations), nonetheless livestock imports in particular grow exponentially to compensate the shrinking animal breeding sector. Mineral resources are abundant, but under-exploited.

Manufacturing is the main industrial activity of the country. Secondary sector accounts for 29.5% of GDP (2019) and employs 26% of the workforce. The Turkish government gives special priority to large infrastructure projects, particularly in the transport sector, through Build-Operate-Transfer (BOT) project financing model. Car manufacturing and textile spearhead the Turkish industry.

The services sector has grown rapidly in early 2000s, peaking at 59% of GDP in 2009 but has fallen since to account for 54.3% of GDP in 2018, while employing 55% of the country’s workforce (2019). Tourism represents nearly 4% of GDP and is a major source of foreign currency for the nation. Hit by terrorist attacks and regional instability in 2016, the tourism industry has seen continued recovery since with international arrivals rising by 14.3% year-on-year to 48 million in January-November and revenue expected to reach USD 34.5 billion by the end of 2019 against USD 29.51 billion a year earlier (Turkish Ministry of Tourism and Culture).

Turkey’s economy is open to foreign trade, which represents 60.2% of its GDP (World Bank, 2018). Automobile (13.2% of total exports including passenger cars, transport vehicles and accessories for vehicles) and gold (4.2%) were top exports of Turkey in 2017, followed by jewellery, textile, petroleum and steel products. The main imported products were gold (7.1%), petroleum products (4.2%), motor cars and accessories (6.3% in total), ferrous waste (2.6%) and telecommunication devices (1.8%).

The country has been pursuing negotiations for trade agreements with Japan, Indonesia and Pakistan. Turkey reached a trade cooperation agreement with Jordan in October 2019 after Jordan suspended the free trade agreement between the two countries and started imposing custom duties in November 2018. Turkey’s tumultuous relationship with the United States has led to a series of changes in American tariffs on Turkish steel and iron imports throughout 2019, as in the previous year. The U.S. increased tariffs once again in October following Turkey’s military operation in northern Syria. The Trump Administration also suspended free trade agreement talks with Turkey.

Turkish trade structure has been characterised by a wide deficit (USD 41,9 billion) mainly due to energy imports and most of its exports being tied to imports of intermediate, semi-finished or raw products and as such, the evolution of trade balance has been traditionally linked to economic growth. In 2018, Turkey’s non-service imports totalled USD 223 billion, whereas the total value of its exported goods reached USD 168 billion. According to WTO, 2018 exports of services were much higher than imports, USD 48 billion and USD 21,9 billion respectively.

The government has maintained an active policy of incentivising the use of locally sourced fuel for power generation by supporting renewables and domestic coal-fired production in order to reduce the country’s reliance on gas imports. At the same time, the currency crisis, which brought the value of Turkish lira to historic lows in August 2018, pressured imports and boosted exports, resulting in trade deficit narrowing by 28.4% in 2018, according to Turkish statistical institute Tuik. The trend continued in 2019, with the deficit narrowing by a further 45% to USD 29.9 billion, according to the Turkish Ministry of Trade.