1. Introduction to the weather in Grenada

Grenada is a sovereign state in the Caribbean Sea at the southern end of the Grenadines island chain. Grenada consists of the island of Grenada itself plus six smaller islands of southern Grenadines which lie to the north of the main island.

Having a tropical climate, Grenada is hot and humid all year round with average annual temperature of 28°C. It is relatively cool and dry  from January to mid-April and a hot, humid and rainy from June to December. Between mid-April and late May, before the hot and rainy season, both the temperature and the frequency of downpours gradually increase.

The amount of sunshine is good all year round, at least on the coast. The rains in Grenada and the Grenadines usually occur throughout the year in the form of downpours or thunderstorms, which could be intense, but generally do not last long, so they do not reduce too much the sunshine hours; sometimes, however, there may be a more intense wave of bad weather.
The sea in Grenada is warm enough to swim in throughout the year: the water temperature ranges from 27 °C (81 °F) in the December-April period to 29 °C (84 °F) in September and October, as we can see in the following table.

2. The weather in different areas

St. George’s and island of Grenada

St. George’s is the capital of Grenada. The town is surrounded by a hillside of an old volcano crater and is on a horseshoe-shaped harbour. It has a humid tropical monsoon climate.

Here are the average temperatures of St. George’s, the capital. As you can see, there is little variation throughout the year.

The interior of the main island is occupied by hills and low mountains, whose highest point is St. Catherine volcano, 840 meters (2,760 feet) high, where a rainforest grows, and we can speak of equatorial climate: precipitation is abundant throughout the year, reaching up to 3,500 mm (138 in) per year, the sky is often cloudy, and the temperature is a bit lower. 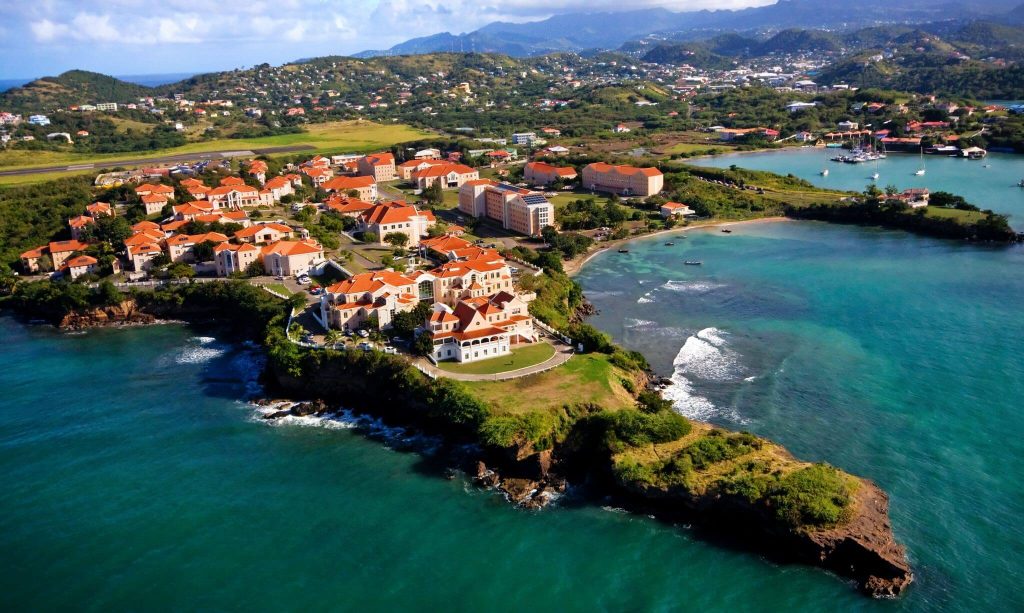 In the southern Grenadines (Carriacou and Petite Martinique, plus some uninhabited islands), the rainfall pattern is similar, though they are a bit drier, in fact, they receive less than 1,500 mm (60 in) of rain per year. In Point Salines, in the southwestern tip of the main island, where the airport is located, being that it’s a flat area and away from inland elevations, precipitation drops below 1,500 mm (60 in) per year as well.

3. Best time to go to Grenada

The best time to visit Grenada is from February to April, since it is the driest period of the year, but all in all, January is an acceptable month as well.